Mass Market to Masses of Markets: The Power of the Niche Brand 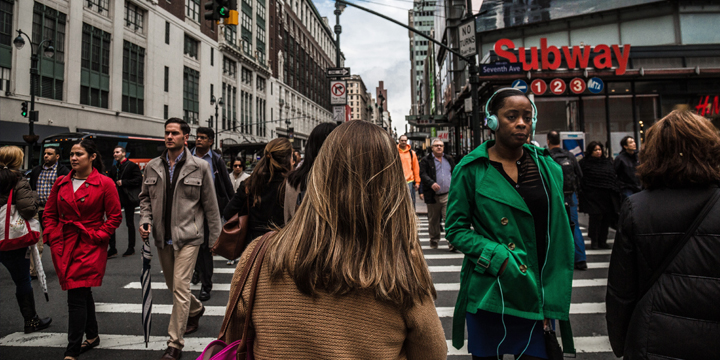 The internet enables a shopper to find "perfect for me" versus "good enough for everyone." Market segments are no longer "suburban homemakers" but instead "coastal suburban homemakers that are college-educated and passionately low waste."

The Oprah Winfrey Show, which targeted suburban homemakers, had over 44 million weekly viewers at its peak. The Ellen DeGeneres Show, today's number one talk show, gets merely 4 million viewers.

The "mass market" no longer exists; it's been fragmented. The fragmentation yields opportunity for products to address each fragment's needs more specifically than a mass market product could.

Tiny Market Segments Are the Heart of Digital Disruption in Retail

Alternative rock was the alternative. Now, do you prefer Seattle or Chicago dubstep?

For brands, I often use the example of Peak Design to show how this works today. Peak Design makes the perfect bags for photographers. But there are many other bag brands. Bag brand Huckberry caters to people that live in cities but secretly wish they were rugged outdoorsmen, for example.

The fact that we can address tiny market segments with specific products is new and is at the heart of digital disruption in retail.

It wasn't feasible to find people in a small segment — or for them to find you! — previously. If you have one person in each town in America who would benefit from a specific, higher-fit product, it would have been impossible to find them pre-internet. (Let alone market to the group economically somehow.)

Even if you could find them, logistically, you couldn't serve them. Scaled manufacturers were set up to deliver shipping containers full of goods to large retailers. It was prohibitively expensive to ship most goods directly to a consumer, regardless of how much of a fit the product would be to her or him.

In the aisle at Stop & Shop or CVS or wherever, coffee brand Folgers competes with a half dozen other coffee brands at most. There are 36 coffee brands on the first page of Amazon.

How do you stand out? It's really, really hard to win on something as generic as "coffee." (Well, you can, but your margins will be eroded over time.)

This mission to stand out is going to be really tough on some brands with inherently generic products. A paper towel is a paper towel; margins in undifferentiated categories like that should trend to zero since substitutes are good enough.

If you want to win on a generic term like "coffee," it will be costly, and prices will trend toward a zero margin. But if you can sub-segment even a little bit — "non-GMO, organic coffee" — then you can differentiate and protect some margin.

The key is finding a specific-enough-but-big-enough market segment where your product and/or brand can truly differentiate to protect margin, and then marketing to that segment economically.

On the Digital Shelf, you want the 20% of the market that will love you — and not the 80% of the product for whom your product is simply "good enough."

In the meantime, brands operating at scale will still see margin advantage through physical stores, but it will not be lasting. Let's look at journalism for inspiration as to what might happen next.

The Internet Breaks Down Previous Structural Competitive Advantages Across Industries

The argument in Stratechery, run by analyst Ben Thompson, is that what killed newspapers (and now, TV) isn't Google or Facebook, but other newspapers or TV.

This same logic applies to retail as it does to journalism.

This structural insulation of regional retail chains is how U.S. retail was before 1962. For the vast majority of industries, there wasn't a national supply chain; it was all local.

The standardization of the shipping container (ISO formally adopted it in 1967) and the Eisenhower Highway System (launched in 1956, but built over decades) allowed big-box stores to target everyone.

In 1988, about 90% of grocery purchases were made in grocery stores according to the data analytics company Inmar. In 2019 it was 44.6%. With COVID, even more market share has been shed from grocery stores to the hypermarkets of Walmart, Target, Costco, and Amazon.

Thus, The New York Times was hugely impactful in the bankruptcy of the Los Angeles Times (and many others) via effective national competition because competition is no longer regional but rather national — or global.

Thompson: You Can’t Be Everything to Everyone Anymore

The insight I loved most from Thompson: One way to win in this new, globally competitive environment is to focus on a niche.

In pre-internet times, The New York Times had to focus on everyone in their geography. And so the editorial board had to make sure to cover both sides of every issue (e.g., try to balance the op-ed columnists with opinions on the right and left) to reach the widest possible audience within their geography.

They had to have something for everyone in their distribution zone and couldn't afford to alienate anyone. With the internet, Thompson's point is that you can't be everything to everyone anymore. His advice to The New York Times is that they should stop trying to play both sides of the spectrum and instead focus on their core, loyal market segment.

From a media, society, and governance perspective, this trend in journalism and media is troubling in many ways.

This same logic applies to many, many brands, and many retailers. When geography doesn't define your market and provide a moat that keeps competition at bay, something else will have to.

For example, the structural advantage a house-of-brands had pre-internet was scaled manufacturing plus scaled advertising, which allowed for leverage on distribution.

A house-of-brands like the Procter & Gamble (P&G) Company with many dozens of $1 billion-plus brands could effectively block emerging brands from showing up on the physical shelf. The physical shelf has limited space, and retailers had to work with P&G. (What retailer needs a third option for dryer sheets?)

This limited competition and allowed for nice margins. On the digital shelf, there is no barrier to entry, upstarts can reach everyone for cheap, and what defines viable competition is entirely different.

The Challenge for Brands Going Forward

The challenge to a house-of-brands: How do you make the strongest case for you in an era of global, open competition? Niching down your product lines to be stronger fits for smaller market segments is likely a key strategy.

Assortments will grow in size and complexity, median percentage market share per SKU in your assortment will go down, and margins will likely go down overall due to the complexity of managing such a business.

To build a house-of-brands for a world of masses of markets instead of a world of a mass market, you'd likely be talking about 1,000 brands with eight- to nine-figures of annual sales each (at best) — instead of a much smaller number of 10-figure brands. That's a big change.

Watch Rob Gonzalez, co-founder of Salsify and founding member of the DSI, compile signals from market data, consumer behavior, and brand manufacturer execs to offer a view of how durable this shift towards digital will be.

Justin King of Salsify: Why Cryptocurrency, Blockchain, Web3, and NFTs Will Reshape the Future of Ecommerce

Kiri Masters and Caroline Adams of Bobsled Marketing: How To Develop Your Brand’s Amazon Success Strategy