John Lert of Alert Innovation: Why Robots Will Transform the Grocery Shopping Experience 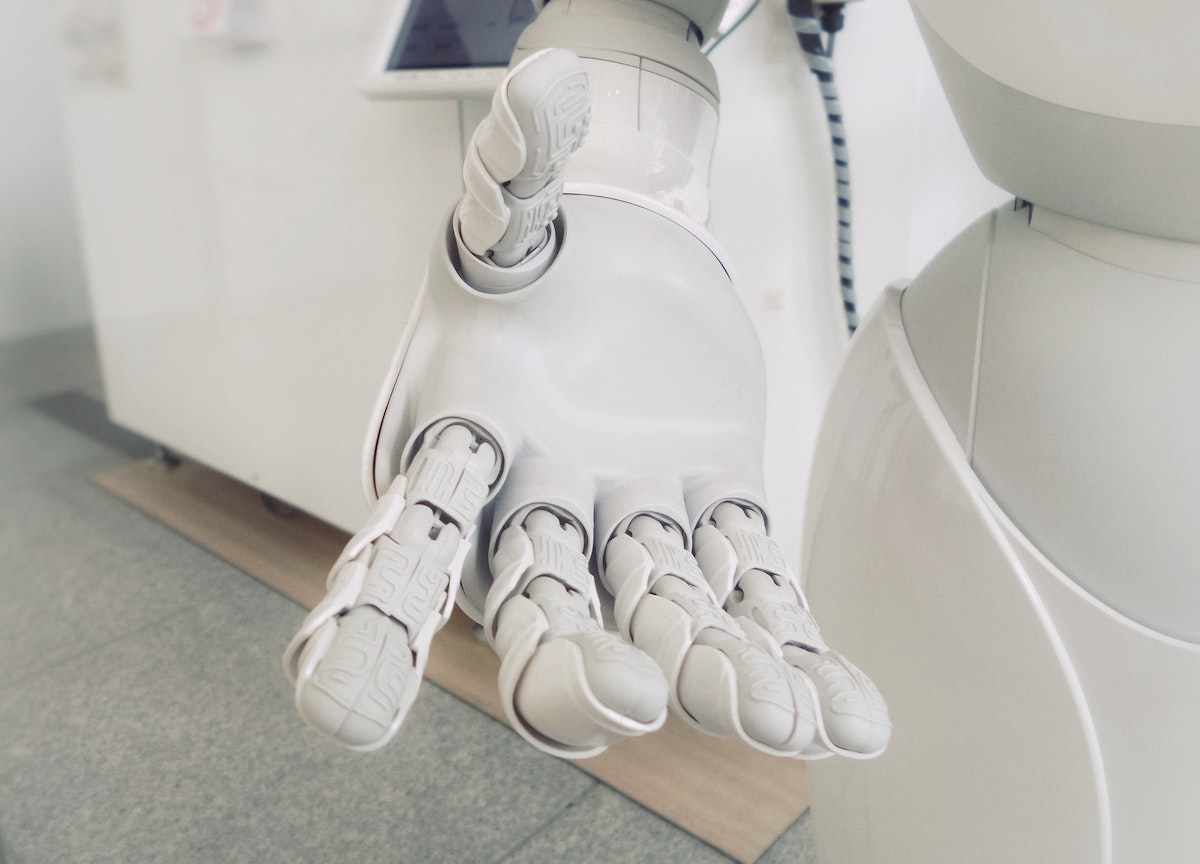 "Retailers absolutely have to automate fulfillment at the store level to be profitable online ... the idea is to eliminate the need for customers to have to walk around the aisles, give them a much more convenient and information-rich customer experience when they're doing their shopping, and let the robots do the hard, menial task of actually picking the order."
— John Lert, Founder and CEO, Alert Innovation

Imagine a world where you'd never have to handpick your groceries again or where you wouldn't have to spend an hour (or more) in-store comparing prices and reading labels.
That time may be right around the corner — and no, not with Instacart or Amazon Fresh. Robots may soon be just as much a part of the tapestry in local grocery stores as the deli counter.

At least that's the hope of robotics inventor and supermarket innovator John Lert, whose Alphabot has begun picking groceries in-store for Walmart shoppers. Lert, CEO of Alert Innovation, a Massachusetts-based technology company that manufactures e-grocery micro-fulfillment technology, said robots might be the key to innovating the center aisle of grocery stores.

"I started imagining a supermarket where machines picked all the packaged goods that customers pick in the center store, but customers still have the opportunity to select their own fresh products in the perimeter of the store," Lert said.

"I got really fascinated in that as an opportunity to both create a superior customer experience and improve the operating profitability for the retailers," Lert said of what drove him to focus on supermarket innovation.

On a recent episode of the Unpacking the Digital Shelf podcast, "ROBOTS!! and How They Will Transform Grocery Shopping," Lert shared details on the Alphabot and how robotics could force grocers to reimagine the center aisle and deliver a more experiential shopping experience.

Bringing Robots to a Walmart Near You

In January, Alphabot, a robot that powers an adaptable automated storage and retrieval system (ASRS), launched in a local Walmart in Salem, NH. The robot plays a crucial role in facilitating Walmart's online grocery delivery and pickup services.

Alphabot works as a small 3D machine that can move vertically, moves around the 20,000-square-foot space, picking fresh and packaged goods consumers have ordered online and depositing them into autonomous carts — no human intervention necessary. It then delivers the groceries to a workstation where a Walmart employee checks the items, bags them, and delivers them to the customer.

This process, called micro-fulfillment, is key to helping grocery retailers like Walmart eke out more of a margin with online grocery, Lert said.

"Walmart, to my knowledge, is the first retailer that actually realized the only way to be profitable in online grocery is to automate fulfillment at the store level," Lert said.

"The idea is to eliminate the need for customers to have to walk around the aisles, give them a much more convenient and information-rich customer experience when they're doing their shopping, and let the robots do the hard, menial task of actually picking the order," he said.
— John Lert, Founder and CEO, Alert Innovation

How Robots Could Change Brand Marketing in Grocery Stores

From in-store displays and circulars to off-shelf promotions and temporary price reductions, brands use a variety of tactics to market their products. With the rise of retailer ad platforms, they now have even more options for where to put their trade dollars.

“In the future, if there is no self-service center store and all packaged goods get sold and ordered electronically, the marketing of those products can change and [so will] how consumer packaged goods manufacturers communicate with their customers and do marketing to support those sales,” he said.

Lert said brands could create digital-friendly, visually engaging packaging to present their products online, for example, while simplifying physical packaging in-store. Since the consumer has already purchased the product, brands wouldn’t have to spend as much to ensure their products are prominent on physical shelves.

They could just invest these resources to ensure their products stand out on the digital shelf — and for a much lower cost.

Lert said robots bring more efficiency to the grocery retrieval process, which could help retailers reduce their labor costs and the inefficiencies of separate fulfillment centers and dark stores.

"If you have a centralized fulfillment model for online grocery, then what they're offering their customers is a competing supply chain. So, you're saying to the customer, 'Either you can come in to pick your own order, or you can order electronically, and we'll pick it in this other facility,'" Lert said.

"The more customers you have selecting online, then there will be a drop in-store revenues. From the standpoint of the store, this looks exactly like their competitors taking their business away — because, in effect, it is — but it's a competitive supply chain for the same retailer," he said.

Grocers already operate on slim margins, and the pandemic has made it worse by moving sales from grocers' most profitable channel — in-store where customers do the shopping themselves— to online grocery, which is the least profitable channel for grocers because of all the labor associated with this service.

Lert said robots like Alphabot bring much-needed automation to this process that can drive down online grocery delivery costs.

"Stores are very highly leveraged. They have a lot of fixed costs and not a lot of variable costs. Every 1% drop in sales is probably a multiple percent drop in operating profits. So, it won't take much shifting of their business to go online before the stores are not making money," Lert said.

"That cannibalization problem is fatal for any retailer that has stores that is embracing online. It's now much more pronounced with COVID because the acceleration is going faster," he said. "What's happening is the shift online is reducing profits because retailers are having to pay people to do what customers normally do for free. It's going to drive the need for automation much more quickly because they can't sustain that model."

Lert's Alphabot is both smaller and thinner than bots that roam Amazon warehouses and other fulfillment centers. The design is a vital part of what makes micro-fulfillment technology so impactful. It allows for greater storage density in warehouses, meaning retailers can store more goods, offer customers a broader assortment of products, and more quickly replenish both popular items and niche products.

Today, retailers rely on large cases or pallets of goods to ensure they have items in stock.

"The problem is that you need lots of space," Lert said about this traditional approach. "So, when we go to automation, we want to make things compact. The way you can do that is by having a smaller replenishment quantity and replenishing more quickly and more often, but that requires a cost."

"What happens with automation is that we can eventually automate that process so that the cost of replenishing more frequently to improve the skew density in the store becomes much more affordable," he said.

Lert added that instead of replenishing by cases, retailers can replenish by eaches and can rely on smaller totes to increase product density. This method ultimately may have an upstream effect on manufacturers, who may start to make their products more compact to fit these totes.

This high-density model may eventually come to fruition with Lert's Novastore concept, a 17,000-square-foot store that can pack the same assortment of products as a self-service grocery store four times its size.

With this concept, customers would order their groceries either remotely or on-site on the first floor of the store, and then the Alphabot would shop their order on another floor. Novastore showcases just one way grocers can integrate in-store and digital shopping experiences while increasing efficiency and their margins at the same time.

Death of the Center Aisle?

While robots may reduce shopping in the center aisle, they likely won't kill it altogether. Instead, micro-center fulfillment technologies may cause grocers to reimagine the center aisle and leverage this valuable real estate to make their stores more experiential for shoppers.

"In a very large center store, we don't need anywhere near that much space," Lert said. "We could have an even larger assortment and compress it into a much smaller area of square footage, and then that frees up that real estate for dining, expanded fresh offerings, cooking classes, or whatever the retailer chooses to do to attract customers to the store."

Though it may take a while to return to the in-store shopping levels that existed pre-COVID, innovations like grocery store robots could ultimately give customers more choice in how, when, and where they shop.

"Picking your own orders in the center store, to me, is not a very satisfying experience. That's not experiential retail. That's being an unpaid warehouse worker. When robots can do that, customers will now have the choice of whether they want to go into the store or not," he said.

Listen to the full episode to hear more about the automation of grocery stores at scale.

Experts Todd Szahun and Kerry Curran: Top Ecommerce Trends That Will Reshape 2021 — and Beyond

Annie Jean-Baptiste of Google: Building for Everyone With Inclusive Products

John Lert of Alert Innovation: Why Robots Will Transform the Grocery Shopping Experience